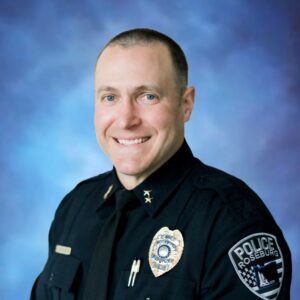 ROSEBURG, Ore.- A group of Roseburg citizens are calling for their police chief’s resignation.

They claim he was seen at a Black Lives Matter protest not enforcing group size limits on a city sidewalk. This, three weeks after he enforced COVID-19 safety guidelines at a local restaurant that resulted in fines for the restaurant.

The group also accuses Klopfenstein of lying to make the city seem safer after data from a 2019 FBI crime report led one article to name Roseburg the most dangerous city in Oregon.

The department said in a statement that the statistics were misrepresented because of the size of the city and their officer’s high response rate.

We reached out to the chief and the Roseburg police department for comment and are waiting to hear back.

Grace Smith is a reporter for NBC5 News. The Chicago native is a recent graduate of the University of Miami with a Communication Honors degree specializing in Broadcast Journalism. She minored in Creative Writing and focused her senior thesis on social media usage and engagement. During her time at the University of Miami, she anchored multiple award-winning student television programs, covering everything from music festivals to the Super Bowl.

Though she loved Miami's beaches, she's thrilled to be in the Pacific Northwest where she can experience all four seasons and have a real Christmas tree! When she’s not at work, you can find Grace glued to any television showing live sports (especially if it’s the Chicago Bears) or attempting a new recipe as she learns to cook.