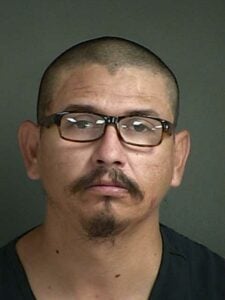 ROSEBURG, Ore. — An arrest has been made, after fatal car crash in Roseburg last week.

The Douglas County Sheriff’s Office says 43-year-old Michael Eugene Garcia was arrested for several charges, including manslaughter, driving under the influence of intoxicants and reckless driving.

Last Thursday, the sheriff’s office says Garcia was driving a Ford Taurus with a female passenger and an infant on Del Rio Road. Police say, when he came upon Wilbur Road, Garcia made a sudden turn into the path of an oncoming Volkswagen SUV.

Garcia and the infant were injured and taken to the hospital. Garcia’s female passenger, identified as 25-year-old Alexandria Ann Contreras-Garcia of Roseburg, died at the scene.

The driver of the Volkswagen was treated for minor injuries.

Garcia is being held in the Douglas County Jail.