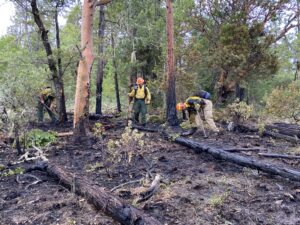 “After we had the thunderstorm we knew there was a potential for these fires to happen. We did have the sun out today things are starting to dry out after the rain we had. So it wasn’t a surprise we did have a hold over the lightning fire,” said Natalie Weber, PIO for ODF Southwest Division.

Weber said they will continue to monitor for smoke and fire in the next couple of weeks after the storm.

The agency also warns people to watch out for smoke and report it, especially if you live in rural communities. If you spot smoke you’re asked to call 911.