Jackson County, Ore — Traffic was reduced to a crawl after a truck collided with a semi on Interstate 5 near the Oregon-California border Friday morning.

The driver of a pickup was transported to the hospital with serious injuries.

According to Oregon State Police the pickup was traveling northbound in the fast lane when it switched lanes behind a semi.

“At the last minute he either recognized or acknowledged it was there and made an evasive maneuver into the fast lane again and ended up rear-ending the semi on the DOT bar,” said Sgt. Jeff Proulx.

The truck was dragged around 75 yards before stopping. The driver of the semi was not hurt.

OSP wants to remind drivers this holiday weekend to be extra cautious driving on roadways. 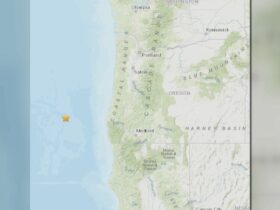