0
0 Shares
MEDFORD, Ore. — Wildfires are raging across the West, and here in southern Oregon, recent lightning storms and red flag conditions are not helping efforts.

Today I got up close with some of the brave people who quite literally, face fire head-on.

Have you ever heard of smokejumpers?

They are specially trained firefighters who jump out of planes to fight fires in hard-to-reach areas. 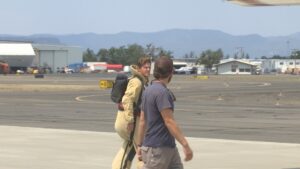 Ty Vankeuren is a U.S. Forest Service smokejumper from Boise, Idaho. He’s temporarily stationed in Medford right now until he’s called out to fight a fire.

He says rookie school for smokejumpers lasts up to 6 or 7 weeks.

He says he parachutes into fires, most of which are caused by lightning.

“The most unique thing about smokejumping is going into a very remote place in the western United States, all of our gear with us, being dropped from an airplane and packing our gear out,” he said.

Vankeuren says he’s required to do proficiency jumps every 2 weeks to qualify to do smoke jumping.