Detectives with the Southern Oregon Child Exploitation Team (SOCET), executed a search warrant at an apartment complex on the 200 block of South Haskell Street. The first suspect, 28-year-old Breanna Leann King was taken into custody on 10 felony counts of encouraging child sex abuse in the first degree.

SOCET arrested 62-year-old Timothy Wray Guss at a home on the 1600 block of Coker Butte Road in Medford. 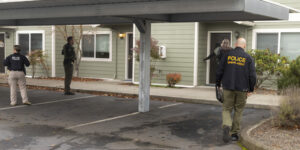 King was also charged with one additional felony count of using a child in a display of sexually explicit conduct. Guss on the other hand, is facing five additional misdemeanor counts of private indecency.

Jackson County Sherriff’s say all known child victims have been identified and contacted.