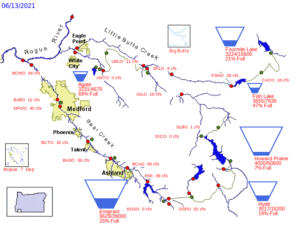 TALENT, Ore. – The Talent Irrigation District is shutting down its entire irrigation system starting Tuesday, June 15. This will be for at least two weeks, if not more.

With the recent weather and severe drought situation facing the Rogue Basin, the agency says the shutdown is being done to extend the limited water supply in our area.

President of the Talent Irrigation District Board Mike Winters said, “We’ve had as much as three years of drought protection, but every year we’ve dealt with less and less water. We kept biting into the savings account, so to speak.”

The people who will hurt the most are hay farmers and cattle ranchers, according to the district. Winters said it could also affect the pear and grape industry as well.

While many may want to help, Winters said the only thing that’ll help our area is rain.