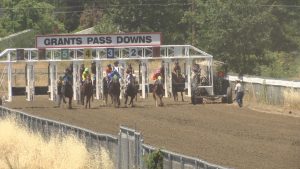 GRANTS PASS, Ore. — The heart of horse racing in Oregon is coming to the Rogue Valley.

TMB Racing in Grants Pass is owned by Dutch Bros. Coffee co-founder Travis Boersma. The company was recently approved to purchase the state license after the recent closure of Portland Meadows.

Boersma said he decided to jump in to keep racing alive in the state.

“Horse racing is here for a good long while,” Boersma said. “It’s very iconic, it’s nostalgic and brings the community together, and something that’s family and friendly and fun,” he said.

Racing is planned for this fall from late September through the end of October.