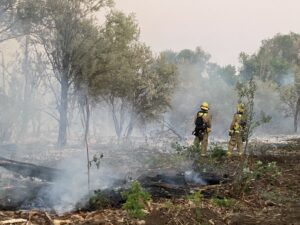 CENTRAL POINT, Ore. – Crews battled a fire on the Bear Creek Greenway from the ground and air as reports flooded in Wednesday evening.

Jackson County Fire District 3 said the fire was reported around 6 p.m. on the Greenway off I-5 Exit 35 near Central Point. It started deep in a blackberry bush making it hard to access.

With the dry fuel, it quickly spread. A helicopter was called in, along with water tenders and a dozer as crews worked to control the flames, sometimes reaching up to 30 feet tall.

“This fire shows the potential we have within the valley. We will get in a really perform a lot of mop-up. It’s gonna take a lot of time,” said FD3 Chief Mike Hussey.

By Thursday morning, the fire was completely lined by both dozers and hose lines. Crews will continue working on removing hazardous trees and mopping up the interior of the fire. FD3 said smoke will probably be visible throughout the day.

Firefighters say there were lightning strikes near the start of the fire, but the official cause is still under investigation. There were no evacuations.