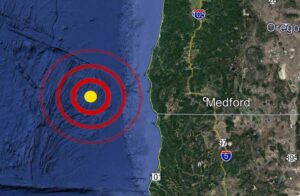 GOLD BEACH, Ore. – A swarm of earthquakes was recorded off the Oregon Coast early Friday morning.

The first quake was reported just before 1:00 a.m. about 85 miles west of Gold Beach. The magnitude 5.9 quake originated from over ten miles below the Earth’s surface, according to the U.S. Geological Survey.

That earthquake was followed by several more for the next couple of hours, ranging in magnitude with the largest being another 5.9.

At no point did the earthquakes trigger any tsunami warnings or watches.

No damage was reported.