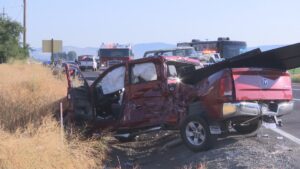 The crash happened at about 8:00 am on Highway 39 and Dehlinger Lane.

Oregon State Police say a truck driven by Edgar Viets of Klamath Falls pulled out in front of a north bound Ford Bronco.

Richard Barnett of Merrill was unable to stop, and crashed into the driver’s side door.

Both men were taken to Sky Lakes Medical Center.

Viets was initially listed in ‘critical’ condition, before being transported to a Bend hospital.

Barnett was treated, and later released.