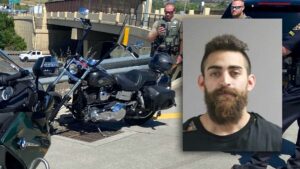 MEDFORD, Ore. – A wanted man was caught after he crashed into a police vehicle in Jackson County.

Investigators said at about 2:50 p.m. Wednesday, deputies in White City tried to pull over a motorcycle operated by Christopher Lee Ridders. Instead of stopping, the man reportedly sped off, running through red lights and in between vehicles.

According to the Jackson County Sheriff’s Office, the pursuit was terminated due to safety concerns. However, multiple law enforcement agencies worked together to track Ridders through the Rogue Valley.

At about 3:30 p.m., Ridders tried to make a U-turn on the Interstate 5 off-ramp in Phoenix, but he ran into a police vehicle and crashed his motorcycle. He was then taken into custody without incident.

The sheriff’s office said Ridders is in the Jackson County Jail awaiting extradition to Washington County.