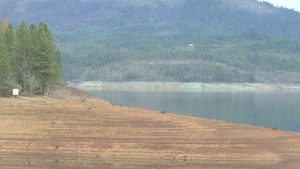 JACKSON COUNTY, Ore. — The recent weather brought snow to the mountains, but it also brought much needed water to our local lakes.

The level of Lost Creek Lake can play a big part with those living on the Rogue River and fish living in it.

The affects have to do with the rise and fall of the Rogue River. When it gets too low, smaller fish can get stuck in pools and not get out. When it gets too high due to a lot of rainfall, it could potentially flood communities along it.

The U.S. Army Corps of Engineers have found a balance to this, and it’s using the dam that separates the river from the lake.

“We’re actually shutting our gates a little bit so that we can capture most of that water and we’re not contributing to the flooding downstream,” said David Tucker, Chief of Operations for the corps, “and that’s how we give the benefit of flood-risk management to downstream communities.”

When they know a lot of rain is coming, they’re able to control the amount of water going into the river.

“We’re trying to catch the water at an established rate that is safe for the communities downstream,” Tucker said, “and then allows us to end up with a full pool t hat we can then use to meter out that water throughout the dry months.”

Due to the recent rainfall this past weekend, the lake has risen almost 20 feet in the last month, and are two feet ahead of fill schedule.

The federal agency said by having more water behind the damn, they can keep a consistent flow of water going down the river all year long.