WHITE CITY, Ore — An early morning fire destroyed a mobile home Friday, leaving a family at a loss for words.

“I don’t know what to do, everything is gone,” Sherri Cooper, who lived at the home, told NBC5. “The smoke started chasing us towards the door and we left.”

Jackson County Fire District Three were called to the home in the area of Sharon Way around 7:30 a.m. Cooper said she was woken up to the fire, and neighbors helped she and her sister escape.

Cooper said she was able to save most of their pets, but fears she lost a cat inside the fire. 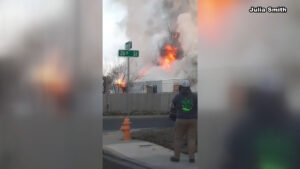 “The smoke was so thick and it was pushing us out the door,” Cooper said. “It’s so bad. When you see it happen to someone else like the Almeda fire, I cried. When it happens to you, it just makes you numb.  I don’t know how to think or what to do.”

The community is quickly stepping in to help them during this time. Cooper’s family says a local church is paying for a room at a motel. Edgewater Christian Fellowship in Grants Pass also plans to assist in the coming days.

A family member says they contacted the American Red Cross, but is planning to set up a GoFundMe in the time being. 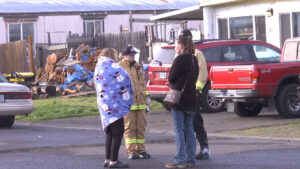 “I think in the next few days its all going to sink in,” One family member said. “But in the meantime, we just to get some funds together and be able to get them some shelter for a few days.”

Despite the tragedy, Cooper said she is grateful that she and her sister are safe.

“I don’t know where to go or what to do, but my sister is alive and I’m alive.”

JCFD3 said there were no injuries and the cause of the fire is under investigation.