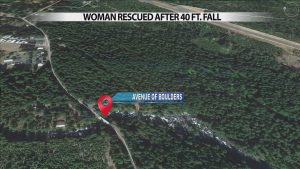 PROSPECT, Ore. – A woman is in the hospital with serious injuries Tuesday after falling 40 feet in prospect.

Jackson County Fire District 3 says she fell while taking a photo near a bridge close to the Avenue of Boulders. Her partner called for help.

She was air lifted to the hospital where we’re told she is recovering.