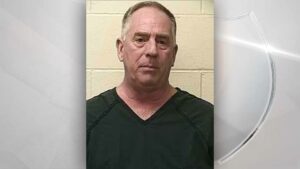 GRANTS PASS, Ore. – The local sportscaster accused of sexually abusing a minor has been sentenced.

Early this year, police in Grants Pass arrested 60-year-old Jay Reese after a 17-year-old girl said Reese sexually abused her at his home.

Prosecutors said they found images on his phone of underage girls engaging in sexual conduct with an adult male.

Police said due to the nature of this case and Reese’s involvement with youth sports in the region, there is a concern there may be more victims. However, Josephine County District Attorney, Joshua Eastman told NBC5 News no other victim came out to his knowledge.

On October 7, Reese pleaded guilty to one count of sexual abuse. The other charges were dropped.

“I have to try and balance locking him up with re-victimizing her because in this case. The terms of probation are so strict I can keep the community safe and save her the victim from having to go through that,” said Eastman.

Reese was sentenced to 25 days in jail with credit for time served and three years of probation. Reese also has to register as a sex offender, which will follow him if he moves out of state. Eastman said he is not allowed to be around minors or where minors gather. He is also not allowed to contact the victim and has to pay her $1,000.