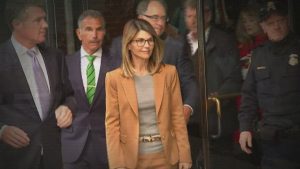 BOSTON, Mass. – Actress Lori Loughlin and her husband, Mossimo Giannulli, have agreed to plead guilty to conspiracy charges for their role in the college admissions scam.

The U.S. attorney for Massachusetts announced the deal, which is subject to the court’s approval.

The couple is accused of paying $500,000 dollars to get their two daughters into the University of Southern California as fake crew team recruits.

They had pleaded not guilty and moved to dismiss charges as recently as two weeks ago.

Under the plea deal, Loughlin will get two months in prison, a $150,000 fine, and two years of supervised release with 100 hours of community service.

Giannulli will get five months in prison, a $250,000, and two years of supervised release with 250 hours of community service.

They are scheduled to plead guilty on Friday at 11:30 a.m., prosecutors said.

The U.S. Attorney for Massachusetts says Loughlin and Giannulli are the 23rd and 24th parents to plead guilty in the college admissions scandal.