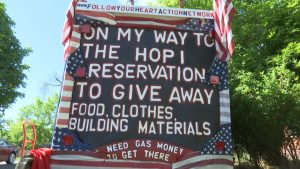 ASHLAND, Ore.– If you’ve driven through Ashland in the last couple weeks chances are you’ve seen a truck decked out in American flags and signs calling for peace and donations.

The truck belongs to Louisiana native Curtis Reliford and it’s known as the Santa Cruz Peace Train and a part of his non-profit Follow Your Heart Action Network.

As Reliford describes it, the origins of the peace train came about in 2005 when Louisiana was hit by Hurricane Katrina. Reliford was in Santa Cruz, California at the time having left his home to get away from a life of drugs and alcohol that had taken over his younger years.

He says he’s been clean and sober for 35 years now and has spent that time trying to help wherever he goes. Hurricane Katrina was his first wake-up call and he gathered what donations he could and drove them across the country to deliver personally to families in New Orleans.

On his 19th trip from California, Reliford says his path crossed with a Navajo family from the nearby reservation in Arizona. He came with them back to the reservation and saw how the families were struggling to get some of the most basic supplies. He describes how the family’s home he stayed with had a broken roof and were in need of clothes.

“They’ve been waiting 10 years for a roof and I had roofing material in my truck,” said Reliford. “I said I can fix that! I know how to fix that!”

From there, Reliford built a relationship that he considers family and began to make donation trips to the Navajo and Hopi reservations. It’s a grassroots effort with Reliford mostly doing it by himself and a truck that’s clocked more than 400,000 miles.

He says it used to be easy to talk to people on the street but nowadays attention spans are smaller so he has to find exuberant ways to spread the word about what he’s doing.

“I just go in the street, take this thing, dance like Michael Jackson, and people go what’s wrong with him,” said Reliford. “And they then come talk to me and they go, ‘Oh we see what you’re doing.’”

Since Reliford first began helping with donations for New Orleans, he’s been recognized for his work. He’s received the American Red Cross’ Good Samaritan Award, the NAACP’s Community Service Award and the Jefferson Award – a program set up in 1972 by Jacqueline Kennedy Onassis and Senator Robert Taft, Jr. to recognize the selfless dedication and sacrifice by individuals to help the community largely without recognition.

But those awards are not why Reliford does this.

“I may not have money, I may not have a PhD but I got love, I got compassion, I got empathy in my heart and that’s what drives me,” he said.

Since the outbreak of COVID-19, the reservations have been struggling more than ever. Reliford says the tribes have been calling him asking to bring donations focused mostly around food, cleaning supplies, and sanitizer.

He says that many people have been helpful but there are still some cases where people misunderstand what he’s doing. Recently, he says a woman called what he’s doing a hoax. Reliford says it’s difficult to hear that when he knows his intentions are good but people don’t trust him to give some of what they have to help others.

“It just put tears in my eyes that man has an abundance of everything they want and I’m just asking for the scraps,” he said.

Reliford says he has his faith to guide him and he trusts everything will work out. He hopes to one day have 12 of these trucks crossing the country, delivering donations to people in need.

Until then, while he’s dealt with the good, the bad, and the ugly, he’s thankful for everyone that has generously donated so far to help the people that need it most.

“We’re only little specks on this earth and it just keeps coming to me that if I can touch two percent of American people to join me on a journey of kindness and caring and sharing – we could change the world,” he said.

Reliford says he’ll be in Ashland until the weekend collecting more donations. He plans to deliver everything in July.

If you would like to help, he’s asking people to donate either non-perishable foods or toiletries, cleaning supplies, and sanitizer.

To learn more about Reliford’s mission, you find out more at the Follow Your Heart Action Network or the SC Peace Train websites. If you’d like to set up a donation before he leaves, you can reach him by phone at 831-246-4240.