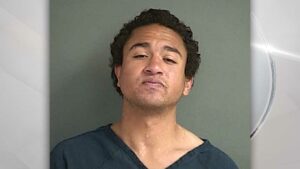 ROSEBURG, Ore. — A man was arrested for allegedly breaking into the Douglas County Courthouse.

The Douglas County Sheriff’s Office said on Monday, December 14, 2020, a county employee at the courthouse noticed a damaged door.

Once deputies were notified about the damage, they looked at surveillance footage showing a man entering the building at about 8:00 a.m. on Sunday, December 13.

The sheriff’s office said they were eventually able to identify that man as 27-year-old Robert Darnell Kemp of Roseburg.