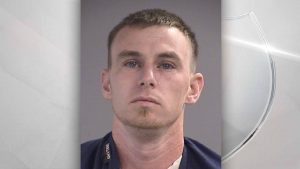 JACKSON COUNTY, Ore. – A man was arrested in connection with a series of car break-ins at a local lake.

The Jackson County Sheriff’s Office said in one case, vehicles were broken into at Lost Creek Lake’s Takelma Boat Ramp on Friday.

On Saturday, 29-year-old Joshua Wayne Haussler was arrested as a suspect in an elude case. Several stolen items from the car break-ins were found in Haussler’s possession.

After Haussler was booked in the Jackson County Jail for the elude case, he was charged with theft and unauthorized entry into a motor vehicle.

The Jackson County Sheriff’s Office said, “Please remember to not leave valuables in your vehicle when visiting recreational areas or even when leaving your vehicle in your driveway unattended.”