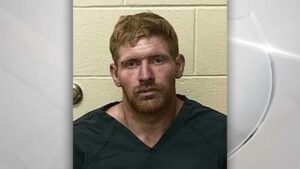 JOSEPHINE COUNTY, Ore. – A suspect was arrested in connection with an attempted homicide investigation in the Illinois Valley area.

The Josephine County Sheriff’s Office said on the night of Monday, July 19, deputies responded to a crash and possible shooting on Kerby Mainline Road in the community of Kerby.

Deputies got to the scene at about 10:23 p.m. and found a Ford Bronco that crashed into a tree and a Toyota truck that had rolled onto its top.

Apparently, everyone involved had fled the area, leaving behind a dog that was left inside the rolled-over truck. It didn’t look like it was hurt, so the dog was taken to the Josephine County Animal Shelter.

Eventually, the occupants of both vehicles were found and identified. One of the passengers was taken to the hospital.

The sheriff’s office said further investigation determined 29-year-old Cory William Morgan fired a gun at the scene of the crash before he fled. He was arrested for menacing, unlawful use of a weapon, and attempted criminal homicide.

According to deputies, the case remains under investigation.