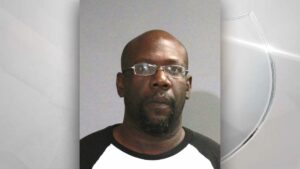 MEDFORD, Ore. – A man was arrested in connection with a fatal shooting in central Medford.

Police said on the evening of May 29, two men were involved in an argument inside Weldon’s Cleaners on Crater Lake Avenue. One of the men left and came back a few minutes later in a black SUV. When the other man approached the SUV, he was shot and killed.

The SUV was later found unoccupied in the 500 block of Mary Street. It was determined to be linked to a nearby residence, which officers surrounded before obtaining a search warrant.

The suspect was identified as 45-year-old Lorenzo Fisher.

The Medford Police Department said for safety reasons, Fisher was contacted by cell phone before officers entered the residence. He said he wasn’t home and agreed to turn himself in to law enforcement in Josephine County, where he was taken into custody and eventually turned over to Medford police.

Fisher was interviewed and lodged in the Jackson County Jail for murder, felon in possession of a firearm, and unlawful use of a weapon.

MPD said a search of Fisher’s home yielded a handgun which was believed to be used in the homicide.

According to detectives, Fisher and the victim, identified as 45-year-old Robert Douglas Houze, didn’t know each other.

The investigation is ongoing and no further information was released by police.