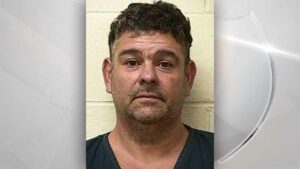 MERLIN, Ore. – A man is behind bars in the Josephine County Jail for numerous charges related to child sex abuse.

On Monday, November 9, OSP served a search warrant at an address in the 3500 block of Quartz Creek Road in Merlin.

During the search, 55-year-old David Todd Campa reportedly tried to run out of the back of the residence, but he was quickly detained.

Detectives released no further information about the case.

Campa is scheduled to appear in court on November 18.