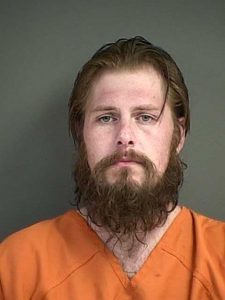 He will be lodged in the Douglas County Jail facing charges of burglary, theft and criminal mischief.

32-year-old Michael Andrew Cordz is wanted for burglary of his ex-girlfriend’s home. Officials say he’s been making threats toward the woman and they believe he is armed.

Tuesday morning around 1:55, deputies responded to a suspicious vehicle in the 5500-block of Roberts Creek Road. When officers got there, Cordz was in the car and ran from officers.

Residents in the area were notified and asked to shelter in place and report any suspicious activity to law enforcement.

Law enforcement officers searched the area but were not able to find Cordz. They did find multiple loaded firearms near Cordz car.

“We want the public to be aware of this situation and report any suspicious activity immediately. If Mr. Cordz is seen, do not approach him, but call 9-1-1. Cordz is considered armed and dangerous,” said Winston Police Department Chief Brandon Sarti.

Officers describe Cordz as a white male, 6 ft., 255 lbs with brown hair and blue eyes. He has several identifying tattoos including a rose and microphones on his chest, a spiderweb on his elbow and a knife on his forearm.