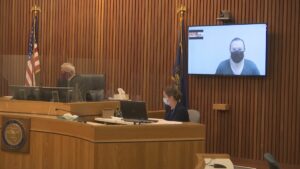 MEDFORD, Ore. – A man was sentenced to prison after standing trial for a second time for the same crime.

The Jackson County Sheriff’s Office said in 2016, Robert Lee Chaffee ran down another man with his car after an argument. The victim suffered a broken leg and other injuries.

In 2017, Chaffee was acquitted of attempted murder, but he was convicted on several counts of vehicular assault. However, only 10 of the 12 jurors agreed on the verdict.

A recent Supreme Court decision makes non-unanimous verdicts unconstitutional. As a result, the case was reversed by the Oregon Court of Appeals and returned to be re-tried, a first in Jackson County.

After going through a second trial, Chaffee was found guilty of assault in the first degree on April 15, 2016. He was sentenced to 90 months in the Oregon Department of Corrections. He will receive credit for time served. Chaffee has been in custody since his initial arrest in October 2016.