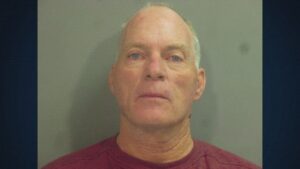 WASHINGTON, D.C. – The man who was photographed resting his foot on House Speaker Nancy Pelosi’s Capitol Hill desk has been arrested.

Richard Barnett of Gravette, Arkansas, was taken into custody Friday morning in his home state on federal charges of entering and remaining on restricted grounds, violent entry and theft of public property.

The 60-year-old is being held in the Washington County Detention Center in Fayetteville awaiting his initial court appearance.

Barnett claims that he knocked politely on Pelosi’s office door, but was then swept inside by other rioters who had breached the Capitol.

He says he also left a “nasty note” using an expletive to refer to Pelosi.