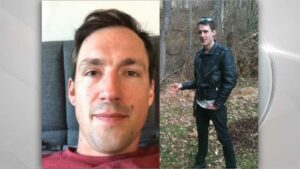 Update (08-30-21 1:20 p.m..) – An Ashland man who was missing in Douglas County was found dead Saturday. His sister told NBC5 News Friday, he was having a medical emergency when he disappeared.

36-year-old Trevor Watson, a local musician was found dead in a creek near his parent’s house. His sister said cadaver dogs from a search and rescue team were the ones that found him.

According to his sister, he suffers from alcoholism and was detoxing at his parent’s home. She said this was not a suicide, there will be an autopsy Monday.

Deputies said 36-year-old Trevor E. Watson of Glendale left his home on Fir Point Lane on Sunday, August 22. He failed to return and his wallet and cell phone were left behind.

The Douglas County Sheriff’s Office searched the area, but they weren’t able to find him.

Watson is described as a white man, 5’8” tall, 135 pounds with brown hair and brown eyes. Investigators don’t know what kind of clothing he was wearing when he disappeared and there are no vehicles associated with him.