Crater Lake National Park, Ore.- A man was rescued Sunday after falling into the caldera at Crater Lake.

According to park rangers, about 3 p.m. Sunday, the 22-year-old man slipped in the snow, fell over the rim and landed a thousand feet below. The people he was with called emergency crews for help.

Park rangers rappelled down into the caldera using a 300 ft. rope. When they couldn’t reach the man, they added another 300 ft. rope, but were still unsuccessful in their efforts to reach him.

Jackson County Sheriff’s Office responded with a Brim Aviation helicopter and were able to lift the man out. 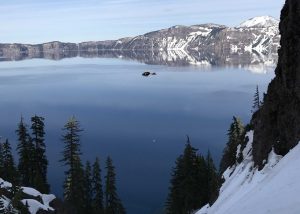 The 22-year-old man was taken to a local hospital.

His name has yet to be released, but rescue crews say he was severly hypothermic with several injuries when they reached him.