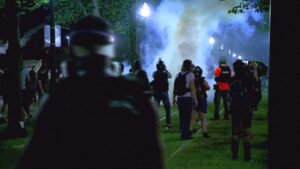 LACEY, Wash. – According to a report from the New York Times, officers shot and killed a man linked to the fatal shooting in Portland this last weekend.

Several news outlets had identified Michael Reinoehl as the shooter in the clashes that took place between rival protests on Saturday. Aaron J. Danielson, a President Trump supporter, was shot and killed during the unrest.

Portland NBC affiliate KGW reported that just before 7 p.m. Thursday the Pacific Northwest Violent Offender Task Force opened fire on a wanted man. A spokesperson for the Thurston County Sheriff’s Office did not tell them the man’s name, but did say the person died.

According to the report, there was a confrontation between officers and the suspect. It said shots were fired by officers. The TCSO spokesperson said the suspect was armed, but could not tell KGW if that suspect had fired at officers.

More details were expected to be released Friday.