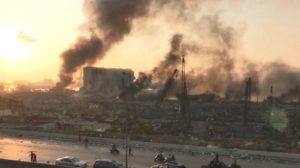 Lebanon’s health minister said the ground-shaking caused a ‘very high number of injuries,’ adding that the damage is extensive and fires are still burning. Local television reported the health minister’s remarks, along with saying the blast was located in an area where fireworks are known to be stored. However, an official cause of the blast has not been determined yet.

Video coming out of the area shows mangled structures still burning, onlookers amid tangled vehicles and debris on nearby roadways.

Media reports show a number of people were wounded and confirming that windows were shattered miles away, with some ceilings also coming down. Lebanese authorities said at least ten people died.