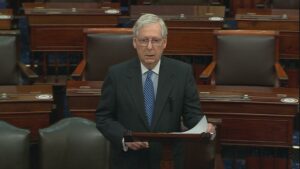 On January 5th Ossoff and Warnock have a chance to knock off the state’s Republican incumbents and strip the GOP of control in the Senate.

“I called him to thank him for the congratulations, told him while we disagree on a lot of things. There are things we can together on,” Mr. Biden later said when asked about McConnell’s comments.

“The court sent a clear signal to President Trump that they would be no part of an unprecedented assault on democracy,” the president-elect said.

The White House is still clinging to the president’s false claims he might still find a way to win.