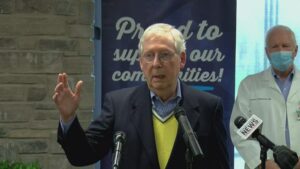 This as President Biden is proposing paying for the plan with a 15-year raise on the corporate tax rate and increases on those making over $400,000 a year.

Senator McConnell called out the president for running a “bold left-wing administration” operating outside their mandate.

McConnell said, “I think that’s a big mistake, and I think that package that they’re putting together now as much as we would like to address infrastructure is not going to get support from our side because I think what the last thing the economy needs right now is a big whopping tax increase on all the productive sections of our economy.”

President Biden introduced the plan Wednesday, saying it’s an investment for infrastructure and middle-class jobs that will propel America into a competitive future.