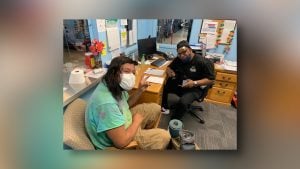 MEDFORD, Ore.– A temporary urban campground could be in Medford by the end of July in an effort to address a variety of issues.

The camp would be an area for the homeless to stay and receive help while combating the COVID-19 crisis.

On the agenda for Medford city council this week, a plan to use the land for a temporary, transitional housing campground.

If approved, a space of private land off Biddle and Midway Road would be designed to help the homeless receive resources and camp safely.

“We are in negotiations with Rogue Retreat to manage the campground and so this is in the works and everything, all the pieces haven’t quite fit together but it looks like they probably will,” said Kelly Madding, deputy city manager of Medford.

The new plan comes after a four-month-long effort to keep the homeless safe during the pandemic by allowing them to “camp in place” on the Bear Creek Greenway.

As COVID-19 restrictions begin to relax and fire danger levels increase around southern Oregon keeping the greenway clear and people safe is the first priority.

Over the past week, Medford police and numerous other service organizations have removed 300 cubic yards of garbage from the greenway and the creek itself.

Since the beginning of March, there have also been 78 reported fires along the greenway and within city limits.

“When we go to a campground and it’s high fire danger, we can’t even have a campfire,” said Madding. “So having campfires will become increasingly dangerous.”

In the agenda item for the council, Medford police and fire departments stated they believe this project warrants a level of urgency in order to move encampments out of dense areas as fire season is upon us.

“The campground would have full-time supervision, there would be sanitation facilities there, both portable restrooms and handwashing stations,” said Madding. “The food that has been delivered on the greenway would be consolidated there, so there would be food as well to people residing in that campground.”

The campground would be open until the end of September with a maximum of 25 campsites to meet distancing requirements.

The city would bear no direct cost for campground operations but money will come from a greenway program with about $45,000 left in its budget. The council will vote Thursday on this item.