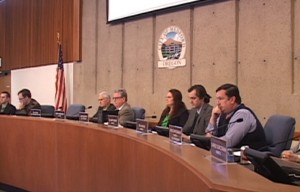 Medford, Ore. — In a heated, and record-setting 3 and a half hour noon council meeting, councilors vote to extend a contract between the Medford/Jackson County Chamber and Travel Medford.

Councilors heard extensive public comment Thursday, with many members of the Chamber board speaking in favor of the contract extension, while those in the industry pleaded with the council to work to separate the two.

“Now there are people leaving [Travel Medford] and its starting to fall apart,” Assistant General Manager of the Rogue Regency Inn & Suites Brady Gibson says, “we’re concerned about that.”

“If we need separation,” Gibson adds, “we are ready to do that now and we would like to see that now.”

“If you don’t renew you’re going to have some great period of time where you’re not going to have an organization that’s overseeing and promoting Medford,” a member of the Chamber board says, “I think that would be a grave mistake and a step backwards.”

With this vote, the council extends the contract to June 30th, 2018, but there is a 180 day termination clause in the contract. Councilors also added an amendment which would create a group of industry professionals who can examine if there is a better way to move forward with Travel Medford.

Councilor Eli Matthews did not vote Thursday, he was just appointed interim director of Travel Medford on Wednesday.