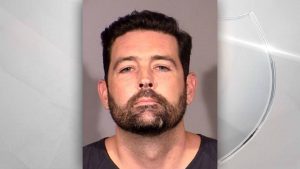 LAS VEGAS, Nev. – A man who graduated from a Medford high school was arrested in connection with a double homicide in Las Vegas.

According to a KNTV report, police said 36-year-old Andrew Cote used a shotgun to kill his neighbors at a home on Mossy Oak Drive Thursday night.

Cote, a South Medford High School graduate, was the one to call police at about 10:00 p.m. He was taken into custody after coming out of his home.

A man in his 50s and a woman in her 70s were found dead outside a neighboring home.

KNTV reports the woman and Cote had an argument earlier in the day before the shooting. Cote and his neighbors reportedly had a long-term dispute.