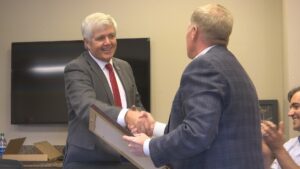 The awards were presented to Brad Hicks at the chamber, with chamber members and directors in attendance.

They honored Hicks for his outstanding work in the local community ahead of his retirement later this month.

Hicks was given the awards following an hour-long discussion.

“There’s the certificate, we flew it over the capital for you,” Rep. Bentz told Hicks.

Hicks was given an American flag, a certificate, and a plaque.