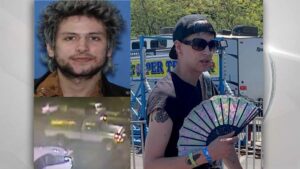 CRESWELL, Ore. – Police near Eugene are asking for help tracking down a missing Rogue Valley man.

The Lane County Sheriff’s Office said 22-year-old Juda Johnson of Medford was reported missing by his family on October 3. He was last seen on September 13 in the Creswell area.

Deputies said Johnson may be traveling with a white man who goes by the name “Bobby” in a 1970s Ford highboy pickup truck which has a tan top and bottom with a lighter-colored strip along the middle. The truck also has a canopy.

Johnson is described as a white man with blue eyes and black hair which may have blonde highlights. He’s about 6’5” tall and weighs roughly 160 pounds. He also has facial piercings and it’s unlikely he has any facial hair.

Lane County investigators said Johnson could be in the McCredie Hot Springs area near Oakridge.

Anyone with further information is asked to call the Lane County Sheriff’s Office at 541-682-4150.