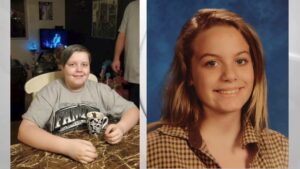 The Medford Police Department said 13-year-old Kail Schmalz and 16-year-old Sophia Cullen are both runaways and may be traveling together.

According to MPD, the pair are believed to be in Ashland and haven’t been seen or heard from since May 4.

“Both families are extremely worried about their kids and hope to be reunited with them soon,” MPD said.