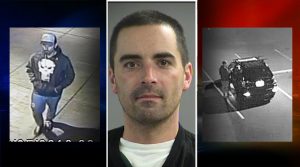 Update (04/28 10:15 p.m.) — Medford Police have arrested a suspected car thief after he returned to the scene of the crime on Wednesday and was tackled by Lava Lanes employees who had immediately recognized him. Police arrested 35-year-old Jesse Gallego on charges of unauthorized use of a motor vehicle. Police say he also had an outstanding warrant for theft in the second degree.

According to MPD, the stolen Subaru Forester is still unaccounted for.

Medford, Ore. – Police are on the lookout for a man who allegedly stole a car from the Lava Lanes parking lot in Medford.

Officers say the suspect was sitting at the bar in Lava Lanes when he was able to swipe a woman’s car keys while she wasn’t looking.

The stolen vehicle is described as a black 2009 Subaru Forester, with an Oregon license plate reading 711HTY. Police describe the suspect as being in his late 20s to early 30s.

If you have any information about the suspect or the victim’s vehicle, you are encouraged to call Medford Police at 541-770-4783.