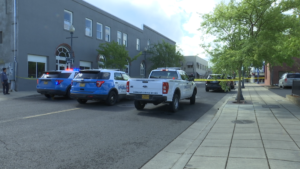 MEDFORD, Ore. – Police are releasing more details about a stabbing that left a man in critical condition.

The Medford Police Department said at about 3:00 p.m. Thursday, several people were being disorderly in the area of South Bartlett Street and East Main Street in downtown Medford.

Officers were dispatched to the scene and found a 37-year-old white man who had been stabbed. He was the only person present when the police arrived. He was taken to a local hospital where he remains in an intensive care unit.

Detectives said they’re still working on getting suspect descriptions, locating possible witnesses, and gathering surveillance footage. There were no named suspects at the time of the last report.

Anyone with further information is asked to call MPD Detective Sal Garcia at 541-774-2244.