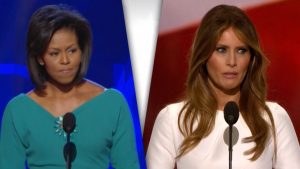 Cleveland, Ohio (NBC News) — The big story out of Cleveland Tuesday afternoon is how parts of Melania Trump’s Monday night speech may have been plagiarized from Michelle Obama’s 2008 speech.

Their words are undeniably similar, with certain phrases matching word for word.

“It’s just another example, as far as we’re concerned, when Hillary Clinton is threatened by a female, the first thing she does is try to destroy the person,” Paul Manafort says.

The campaign says a team of writers worked on the speech. Mrs. Trump says she wrote it.

This controversy happens as Donald Trump prepares to be officially nominated. Despite an uprising Monday by anti-Trump delegates, the vote is set for Tuesday night.