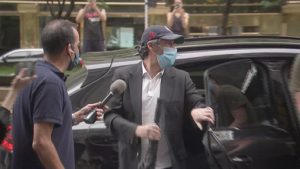 U.S. District Judge Alvin K. Hellerstein ruled that Cohen’s First Amendment rights had been violated when he was ordered back to prison on July 9th.

The move coincided with Cohen’s refusal to sign a form banning him from publishing books or communication with the media.

Judge Hellerstein said the return to prison was designed to punish Cohen as he attempts to publish his upcoming book.

The Bureau of Prisons responded that the reimprisonment of Cohen was retaliatory was patently false.

Cohen is serving a three-year prison sentence after pleading guilty to campaign finance charges and lying to Congress.