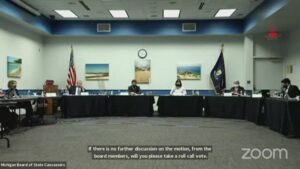 With all 83 counties having already voted to certify their results, the Board of State Canvassers had what was called a “ministerial” duty to certify the results at the state level.

Before the vote, GOP board member Norm Shinkle read a lengthy statement before abstaining, and moving that Michigan legislators review the state’s election proceedings.

The other Republican member, Aaron Van Langevelde said after reviewing every section of the statute, he saw no justification for a delay.

He joined the two Democratic members in voting to certify the state’s votes.

The board voted unanimously to authorize the staff of the Bureau of Elections to represent the board in any recount of votes cast in the 2020 general election.