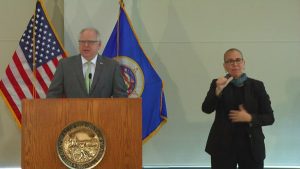 MINNEAPOLIS, Minn. (WCCO/CNN) – Minnesota is launching a state investigation into the policies and procedures of the Minneapolis Police Department.

The government agency has filed a civil rights charge in the death of George Floyd while he was in police custody.

Minneapolis police fired the four officers involved but only one has been arrested and charged.

Protesters are calling for the other three to also be arrested.

“Minnesotans, you can expect our administration to use every tool at our disposal to try and deconstruct systemic racism that is generations deep,” Walz said. “And as we move forward, we’re going to need to do it with the community. But I think the thing I’m hearing from the protesters is: ‘We’re not watching, and we don’t care what you say. We care what you do.'”

Minneapolis’ city council president called the state investigation an “unusual move” but she promises the council is on board to cooperate.