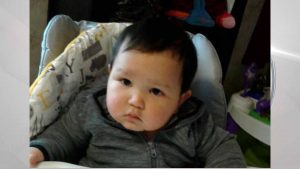 San Jose, Calif. – An 8-month-old boy who was left inside a running car when it was stolen was found safe in San Jose, California.

The baby was sitting alone in the back of a car parked in Soledad when a suspect jumped in the vehicle and drove off, according to the Soledad Police Department.

An Amber Alert was issued following the incident.

Just hours after the boy disappeared, citizens spotted the suspect and were able to take the baby to safety.

He’s now “safe and sound,” according to police.

Officers said the baby’s father forgot something inside their home when he ran inside to grab it. When he came back out, the child and car were gone.

NBC Bay Area reports a woman named Mamas Ramirez, who said the suspect was homeless, pounded on her door Monday morning and asked her to take the baby.

Ramirez said the suspect then tried to break into a nearby van to steal a scooter.

That’s when Ramirez and a nearby construction worker decided to snatch the baby from the car.

The suspect then got back inside the car and left the scene.

He has not yet been located.