0
Share
CHILOQUIN, Ore. – A missing 20-year-old woman was found a few days after she was almost abducted.

The Klamath County Sheriff’s Office said on Sunday, September 18, 20-year-old Molly May Swedenskey’s estranged boyfriend broke into her Chiloquin home and tried to abduct her by force.

The estranged boyfriend, identified as 19-year-old Eric Patrick Koon, allegedly bound her wrists with zip ties and taped her mouth shut before Swedenskey was able to get away and call for help.

Investigators believe Koon fled the immediate area after the incident, but he may have been living in his vehicle nearby since the abduction attempt, staying close to Swedenskey without her knowing.

By the following Tuesday, Swedenskey was reported missing from her residence. Her cell phone and vehicles were accounted for, and her two small children were both left behind at their Chiloquin home.

KCSO said the behavior was “extremely abnormal” for Swedenskey. Deputies listed her as “abducted” and “missing, endangered.”

On Tuesday night Swedenskey was found at the Pilot Travel Center in Chemult.

Koon, identified as a person of interest in the abduction, fled the area on Highway 97 at speeds exceeding 100 miles per hour.

KCSO deputies reportedly deployed spike strips, which helped bring the vehicle to a stop near milepost 222 on Highway 97.

Investigators said Koon was able to flee into a nearby wooded area with a handgun.

According to KCSO, officers searched for Koon for several hours but were unsuccessful.

If you see Koon or know anything about his whereabouts, do not approach him and call 911 immediately. 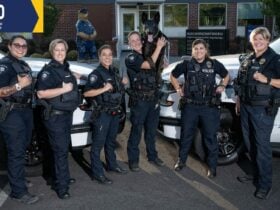