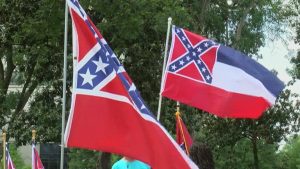 Lawmakers in the Mississippi House and Senate approved the bill that will require the current flag, which contains the Confederate battle flag, to be removed within 15 days.

The bill will not become law until Governor Tate Reeves signs it. But he has said that he will sign the bill when it comes to his desk.

Workers at the state House brought the flag down for the day, one of the last days it will fly over the capitol in Mississippi.

Most lawmakers in the capitol were happy with the bill’s approval.

According to the bill, a nine-member panel will consult with the public and experts to come up with a design for the new flag.

The bill states the new flag cannot have the Confederate battle flag anywhere on it and it must include the words: “In God We Trust.’

Lawmakers are hoping new flag design will be voted on in November.