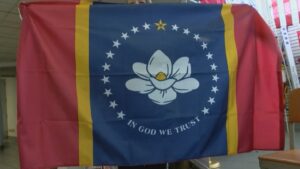 “I’m going to put mine up today right beside my JSU flag,” said Philip Brown, a customer who couldn’t wait to buy Mississippi’s new state flag.

He’s one of hundreds of people to buy one from A Complete Flag Source in Jackson. Owner Brenda McIntyre pre-ordered some before Election Day.

“I had over 400 flags in stock, waiting. So it would have been, you know, it was a chance that we took to have that many flags already here, but it’s been great because we’ve been able to fill orders right away,” said McIntyre.

Even before the election, she says the magnolia design received a lot of love.