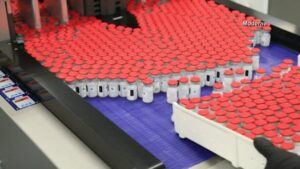 On Sunday, Doctor Anthony Fauci said the U.S. will likely start to distribute Pfizer’s booster shots during the week of September 20th but the rollout for Moderna’s vaccine could be delayed.

The Biden administration has announced plans to offer third doses to people who received the Pfizer and Moderna shots, pending approval from public health officials.

Fauci said it looks like only the Pfizer vaccine will get that approval in time for the September rollout.

The U.S. has recommended an additional third shot eight months after the second dose.

According to the CDC, more than 95 million people have received Pfizer’s two-shot regimen.

Regulators have not announced plans for a J&J booster.