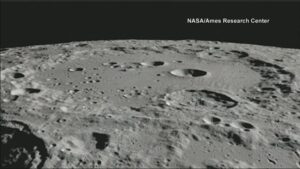 NASA knew there was water in cold, shadowed spots. But with a telescope high above the earth, scientists found it in sunlit areas as well. Specifically in the Clavius crater.

NASA put a telescope on a modified BOEING 747-Sp aircraft called “SOFIA,” which stands for Stratospheric Observatory for Infrared Astronomy.

SOFIA flies at altitudes of up to 45,000 feet allowing scientists to study the Moon and beyond in ways not possible with ground-based telescopes.

While astronomers did find evidence of water in the Clavius crater, it was a very small amount, enough to fill a 12-ounce water bottle.

To put that in perspective, the Sahara Desert has 100 times more water than SOFIA found in soil on the Moon.

The results are published in the latest issue of “Nature Astronomy.”